Munich/Ulm, 3 June 2019 --- idem telematics is radically simplifying the installation and maintenance of telematics hardware in trailers: TC Trailer Gateway PRO is the first solution to integrate central functions and can also communicate via five different wireless standards. This simplifies the installation of original equipment and greatly speeds up retrofitting and service work – and the device also remains open for further applications in the future.

Knowledge is power - but most freight forwarders hardly know where their vehicles are located at the moment and how freight and drivers are doing: The European market leader idem telematics has collaborated with hauliers and trailer manufacturers to analyse the reasons behind this – and is working to eliminate these. At the transport logistic trade fair in Munich, idem telematics (Hall A6, Stand 310) is presenting TC Trailer Gateway PRO as new telematics hardware that makes it easier than ever before to install, operate and expand telematics functions. As a central ‘interface’ of the trailer, the new TC Trailer Gateway PRO not only receives all of the data from the trailer, but also actually replaces hardware that previously had to be laboriously installed separately. For the first time, signals from the door, cooling unit and tyres can be processed and managed wirelessly and without intermediate ‘hub’ devices – in both directions. Another new feature is a Bluetooth tag for the truck, which enables the trailer to automatically detect which towing vehicle it is connected to. The new TC Trailer Gateway PRO supports Bluetooth, WLAN and 433 MHz, as well as 2G/4G with GPS, Galileo, GLONASS and other standards. For the first time, data from the trailer can therefore be transmitted directly into the cab without being diverted through the mobile communications network and various servers. On top of this, garages are now able to perform configuration, diagnosis and system checks via a smartphone app.

In a typical reefer body with three axles, tyre pressure monitoring, temperature sensors and temperature recorders, the initial installation of the new TC Trailer Gateway PRO takes less than half the time compared to common devices with cables. This makes the system equally appealing for original equipment and for retrofitting – particularly since hauliers have unlimited options for expanding their individual telematics solutions further. Alongside the wireless connection, sensors and end devices can still be connected via databus lines. There is virtually no relevant interface that the new TC Trailer Gateway PRO from idem telematics cannot support.

‘Hauliers don’t want rigid rules – they want to progress into the world of telematics in their own way,’ explains Jens Zeller, managing director of idem telematics. ‘To enable this, they need a software and hardware concept that is open to everything. TC Trailer Gateway PRO is an attractive option for original equipment and for retrofitting as it is simpler than any other solution to install. The open nature of the system was and is the hallmark of idem telematics and our secret to success. We are taking this philosophy to a whole new level with the new TC Trailer Gateway PRO. We are delighted to be presenting this important leap forwards in development to the industry at transport logistic in Munich, a whole half a year before the official market launch.’

Picture caption: It may look inconspicuous, but the new TC Trailer Gateway PRO telematics hardware from idem telematics holds a great deal of knowledge and potential for transport companies. 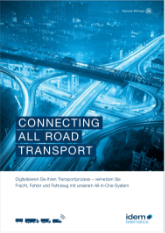 Increase transparency, efficiency and security through digitalisation of transport and logistics

Arrange a demonstration and consultation